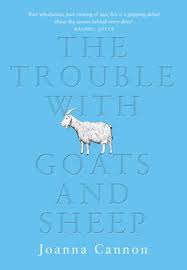 I absolutely love the Waterstones store on Deansgate in Manchester city centre; I’m always popping in for a good old mooch and end up treating myself to a book or two. One of my guilty pleasures is sauntering up to the cafe and hiding in a quite corner to read my book over a cup of coffee and a scone.

After receiving loads of lovely Waterstones vouchers for Christmas I found myself frequently venturing to the Deangate store early in the New Year; and it was there and then that The Trouble with Goats and Sheep first caught my eye. I recall seeing stands propped up in vivid sky blue with simple images of goats and sheep as the store promoted its March event with author Joanna Cannon. I didn’t have a clue what the book was about but I went ahead and bought a ticket for the event anyway. I have sometimes thought why I did so as I usually only go to these things if I’m a fan of the author or genre; maybe it was the simple quirky cover that appealed to me or the authentic endorsements from the Waterstones staff. Also the title did intrigue me; what was The Trouble with Goats and Sheep?

I did mean to buy a copy of the book and read it before the event but I just never got round to it. On the evening of the event I still didn’t have a clue what the book was about (believe me, that is not like me at all) but I was excited to be going to find out.  I wasn’t disappointed! As soon as the event finished and I had my newly-purchased signed copy of Goats and Sheep, I found myself rushing home to start Cannon’s debut novel.

Cannon was inspired to write The Trouble with Goats and Sheep through her work as a psychiatrist in which she often met people which society can view as outsiders; different; odd; goats. She also notes as a motivation for the novel was the frightening treatment by society and the media of Christopher Jefferies, the landlord falsely implicated in the murder of Joanna Yates in 2010.

Set in a British suburban avenue (we are never told exactly where) in the 1976 heat wave, The Trouble with Goats and Sheep is mainly narrated by ten-year-old Grace as she along with best friend Tilly decide to solve the mystery of their missing neighbour Mrs Creasy.  Following a conversation with the local vicar in which Grace is told ‘if God exists in a community, no one will be lost’, the girls go in search of God:

“And it all became so obvious. ‘I know what we’re going to do with the summer holidays,’ I said, and got to my feet.
Tilly looked up. She squinted at me and shielded her eyes from the sun.
‘What?’
‘We’re going to make sure everyone is safe. We’re going to bring Mrs Creasy back.’
‘How are we going to do that?’
‘We’re going to look for God,’ I said.
‘We are?’
‘Yes,’ I said, ‘we are. Right here on this avenue. And I’m not giving up until we find Him.’
I held out my hand. She took it and I pulled her up next to me.
‘Okay Gracie,’ she said. And she put her sou’wester back on and smiled.”

The innocent charm of Grace’s narrative is broken up by chapters narrated in the third person in which we as the reader have the opportunity to delve into the lives and homes of the other neighbours living on the avenue, such as Harold and Dorothy Forbes, Thin Brian and Sheila Dakin. It is also through reading these chapters in which we are privy to the characters views, pasts and insecurities that the tension of the novel slowly builds. The subtle way in which Cannon structures the chapters makes Goats and Sheep a very powerful read; innocent charm juxtaposed with small minded hypocrisy and its devastating consequences.

Setting the novel in the heat wave of 1976 with the hot weather forever present in the narrative adds to the tension of the plot. The hot summer symbolises the oppression of judgmental ‘neighbourly’ concern and artistically evokes how Goats and Sheep is a coming-of-age story:

There was nowhere to escape the heat. It was there everyday when we awoke, persistent and unbroken, and hanging in the air like an unfinished argument. It leaked people’s days onto pavements and patios and, no longer able to contain ourselves within brick and cement, we melted into the outside, bringing our lives with us. Meals, conversations, discussions were all woken and untethered and allowed outdoors. Even the avenue had changed. Giant fissures opened on yellowed lawns and paths felt soft and unsteady. Things which had been solid and reliable were now pliant and uncertain. Nothing felt sure anymore. The bonds which held things together were destroyed by the temperature – this is what my father said – but it felt more sinister than that.

In my view The Trouble with Goats and Sheep is a powerful critique on how we as a society can view those that don’t fit into the ‘social norm’. However it is also a suburban mystery; a novel about friendship and the innocence of childhood. It is a charming read which personally made me feel very nostalgic for my own childhood summers.

Cannon herself is an inspiration. This is her debut novel which she wrote in her car during her lunch breaks. Furthermore she didn’t really tell people that she was writing it, she did it for her own pleasure and to discover more about her creations, Grace and Tilly, two characters whom she clearly loves.

It was reported in the media a few months ago that The Trouble with Goats and Sheep had already been optioned for a TV drama. I am very much look forward to watching that; I just hope that the TV adaptation does this very beautiful novel justice.