I wanted to read Sirens for two reasons; everyone was raving about it and it’s set in Manchester where I live.

Although we’ve only just really started 2017, Sirens is definitely one of the best crime novels of the year. It is dark, seedy and compelling. It also seems very real as we follow anti-hero Aidan Waits. He drinks too much, takes drugs just to get through the day, his life is out of control. He is also a disgraced detective constable forced to work undercover infiltrating a major drugs gang. 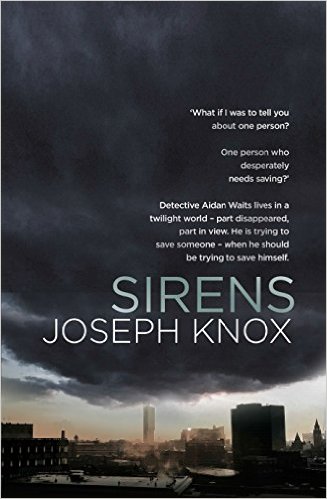 The gang is led by Zain Carver, introduced to us as a ‘businessman among thugs.’ Aidan’s job is to get close to Carver, gain his trust and exploit that trust to bring Carver down, as well as hopefully solve an old murder case. To add to this Aidan is summoned to meet a powerful MP whose teenage daughter Isabelle has run away and now works as a siren. The ‘sirens’ are the women employed by Carver to collect drugs money from bars and clubs. Aidan’s undercover work gets more complex as he is instructed to keep an eye on Isabelle.

The plot takes a series of dark, unsavoury twists that as a reader have you questioning each character and their motives. But it keeps you reading. If I’m honest I’m not sure I really liked many of the characters in this novel. But this is a novel about the underbelly of Manchester. It is gritty and the characters are complex and dark.

Aidan is a frustrating protagonist, a loner on a path of self-destruction, often high and hungover:

“I woke up, against all odds, face down in a bed. My head felt like a Russian doll. Like I had six skulls, each smaller than the last, placed one inside the other. When I moved or thought too deeply, they rattled together, and it was a long time before I could roll over and open my eyes.”

However Joseph Knox, the author of Sirens gives us snippets of Aidan’s back story which made me empathise with him and care for him. I am intrigued to find out how the character of Aidan Waits further develops in Knox’s future novel The Smiling Man. I also want to know more about the history of Aidan.

Someone has referred to Sirens as Manchester noir, which is so apt. The way Knox structures his novel, with short chapters and terse but vivid sentences really captures the noir genre. Living in Manchester, I loved reading about the city I know in this way. Although Knox portrays Manchester as dark and gritty, I feel he also portrays the realness and beauty of the city too.

Sirens is a fantastic novel from a new writer. It is fast paced, compelling and unconventional. It is a must read.