Set in a nameless village along the crumbling Yorkshire coastline where homes are swallowed by the sea, the erosion of the land is symbolic of the deterioration of family life. This a haunting novel that explores difficult themes including alcoholism, dementia, abandonment and mental health.

The story centers around Jacob who we initially meet when he is 16. Jacob is fiercely protective of his six-year-old sister Ella. To escape from their parents arguments Jacob and Ella play the ‘underwater breathing’ game; submerging themselves in a bath and holding their breath for as long as they can under the water. However after one stormy night Jacob wakes up the next morning to find his mother and Ella gone. Left with his alcoholic father Jacob is distraught at the loss of his sister. 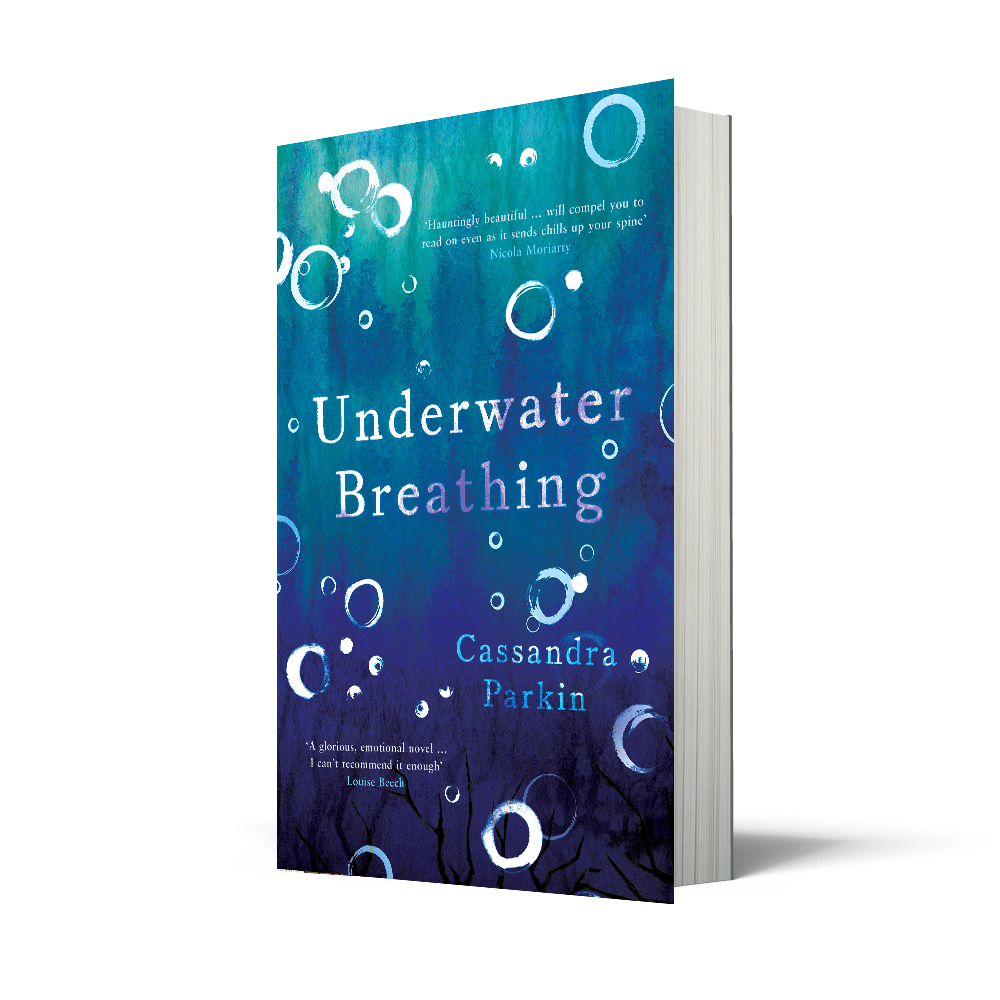 The story moves on 10 years and Jacob is the sole carer of his father who is often argumentative and violent due to his alcohol induced dementia. The only person available to support him, although reluctantly is Mrs Armitage, his brusque neighbour. Lonely, struggling to cope and still grieving over the loss of his sister, life takes an unexpected turn when Ella suddenly returns.

Underwater Breathing is subtle, tender and emotional. I loved it and am so pleased that thanks to Legend Press, I was given the opportunity to interview its author Cassandra Parkin.

Q. Thank you for allowing me to interview you. I’ve just finished Underwater Breathing and it has really got under my skin. I practically cried all the way through. Thank you for such a beautiful novel – I loved it. What inspired you to write this novel?

A. Thank you so much for having me – I’m thrilled you enjoyed Underwater Breathing!

The first little seed of the story came from a news report about the village of Skipsea on the East Coast of Yorkshire. A lot of our coastline is mud cliffs, and they’re eroding at a terrifying speed. A couple whose house was about to fall were being interviewed. The reporter asked the obvious question – why did they buy a house they knew would one day be taken by the sea? And they said they’d bought it to retire to, because they’d always wanted to live by the sea, and although they knew the house would fall eventually, they’d thought they would both be dead by the time the water got to them. And that seemed like such a strange, bleak, powerful bargain to make – gambling on the timeliness of your own death – that I knew I’d one day write a story about it.

The second seed was a Jean Nathan’s biography of the children’s author Dare Wright – The Secret Life Of The Lonely Doll. Dare and her older brother Blaine were separated by their parents’ horribly acrimonious divorce, and only met again as adults in their twenties. The description of their reunion was absolutely haunting.

Q. I loved the main characters, especially Jacob. He tore my heart as his grief and feelings of love, abandonment and loyalty are so poignant and vivid. Why did you choose to write the novel from mainly Jacob’s point of view?

A. I love Jacob too! Even though he’s so flawed in many ways, he’s doing the best he can in a nearly impossible situation. I wanted to write mainly from his point of view because I thought he had the most interesting journey. He goes from being stuck in a tiny repeating loop, to letting go of everything he thought he knew about himself and finding a way to move forward.

Q. The plot takes quite a few turns that are unexpected. Did you plan it this way or did the turns surprise you?

A. What a great question! Without wanting to spoil the story, there is one event that came to me very early in the writing process, and then immediately thought “nope” and refused to accept it had to be part of the story. I was so resistant to it that I started a whole other version of Underwater Breathing, based on what I wanted to happen rather than what the characters were telling me happened. I wrote forty thousand words of that version, hating every word of it and getting more and more miserable with every day that passed, and in the end I had to admit defeat and throw the whole thing away and start again.

It’s been really interesting, seeing readers’ reactions to this part of the story. Some have said they saw it coming and felt it was inevitable, while others found it came as a shock. But it really was inevitable.

Q. Mrs Armitage has her own very personal and dramatic story. As a reader I would love to explore Mrs Armitage’s story more. As a writer do you think you ever will?

A. Mrs Armitage fascinated me too. She wandered into the story as a minor character, but the more time I spent with her, the more her own story unfolded. I’d love to know more about her too. Maybe she will come back to shore one day and share some more of her life with me.

Q. I’ve read that you’ve got a passion for fairy tales. Can you tell me more about this passion please? Also do you view Underwater Breathing as a modern-day fairy tale?

A. When I was little, I had an unexpurgated copy of Grimm’s Fairy Tales, and I don’t think I’ve ever got over it. They’re such dark, peculiar, amoral stories – stories that warn us to stay out of the woods but that also teach us how to survive, stories about good marriages and bad ones, about good parenting and terrible parenting and the challenges of blended families, about impossible events and events that are heartbreakingly believable, about lives lived in luxury and lives on the bread line, about people who are unreasonably lucky and people who are unreasonably unlucky and people who get maybe more than they deserved, in either direction. And they can be endlessly reshaped and retold.

I think that’s what makes a fairy-tale for me – a story that we all feel we’re allowed to re-tell and borrow from, a story that we feel has a “real” meaning that we want to tease out and explore. I’d class Alice In Wonderland as a fairy-tale, and the Sherlock Holmes stories, and Doctor Jekyll and Mr Hyde, and maybe even Jane Eyre…fairy-tales are like a bottomless treasure-chest for writers. I raid that chest for everything I write.

As for whether Underwater Breathing might be a fairy-tale…I honestly don’t know, but I’d love it to be. I can’t think of any greater compliment than having someone read my work and feel inspired to create their own.

Thank you Cassandra Parkin for a great interview and also for Underwater Breathing, such an emotionally charged read. I will definitely be reading more from you! Also thank you to Legend Press for inviting me to be part of the blog tour. It’s been an absolute pleasure.

As highlighted above, I am part of the blog tour to help publicise this unique book. Please also have a read of the reviews from my fellow bloggers. 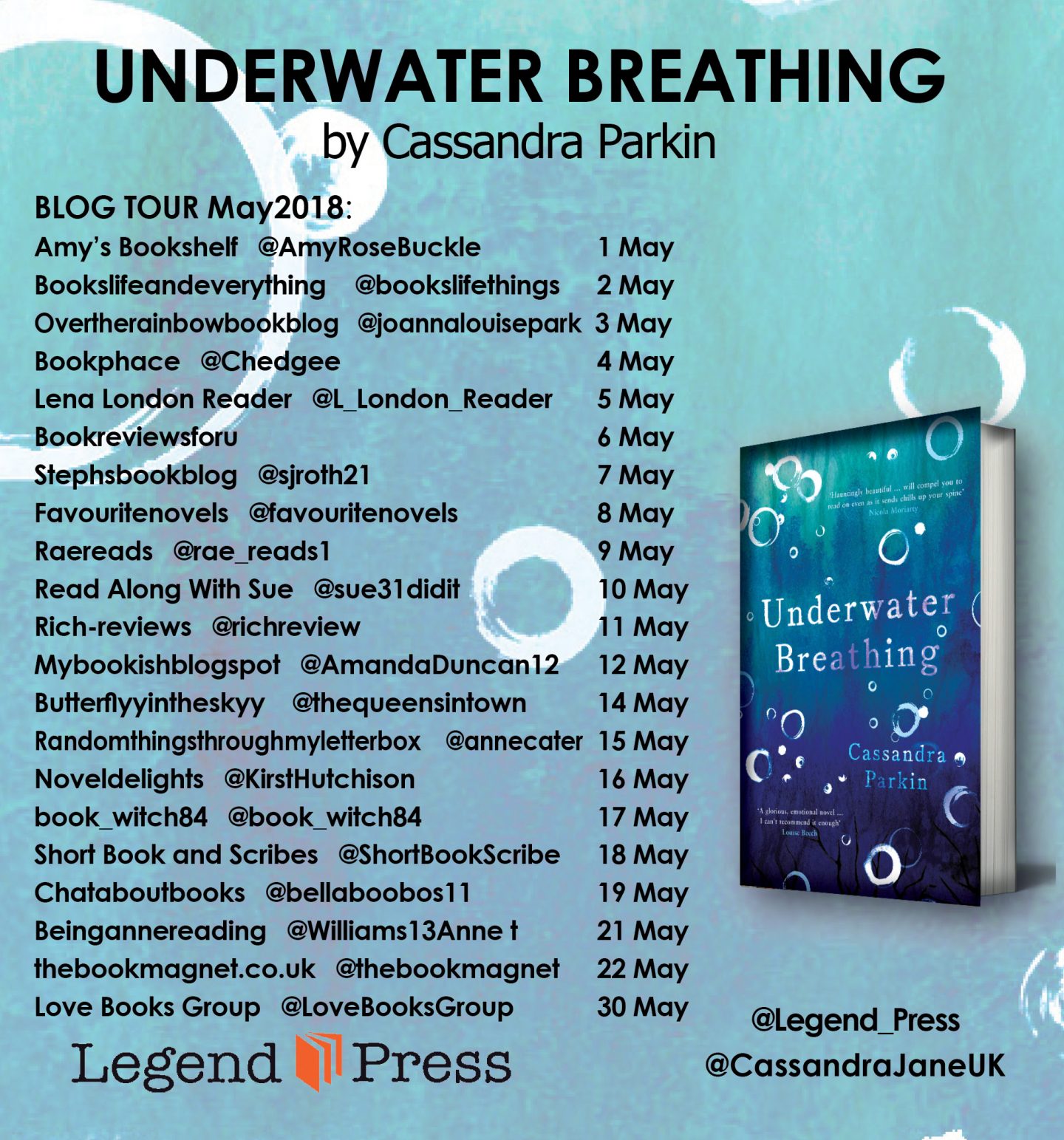 Publication date of Underwater Breathing: 3 May 2018.

It is available from Amazon now, so go and buy a copy and let me know what you think. 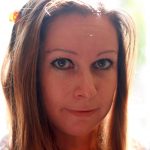 Cassandra Parkin grew up in Hull, and now lives in East Yorkshire.

Her short story collection New World Fairy Tales (Salt Publishing, 2011) won the Scott Prize for Short Stories. Cassandra’s writing has been published in numerous magazines and anthologies.
You can follow Cassandra on Twitter @cassandrajaneuk
My rating: