Crikey, I’ve not posted any reviews of my book group reads in ages. If you’re a regular follower of Novel Delights you’ll know that a bunch of good friends and I have a monthly book group – giving us the chance to open our literary minds as well as having a good old chinwag.

Made up of Claire, Hazel, Holly, Kim and myself, we take turns to pick a book to read. This could be an old favourite, a new book that we’re desperate to read or a recommendation – it is entirely up to whoever is choosing. 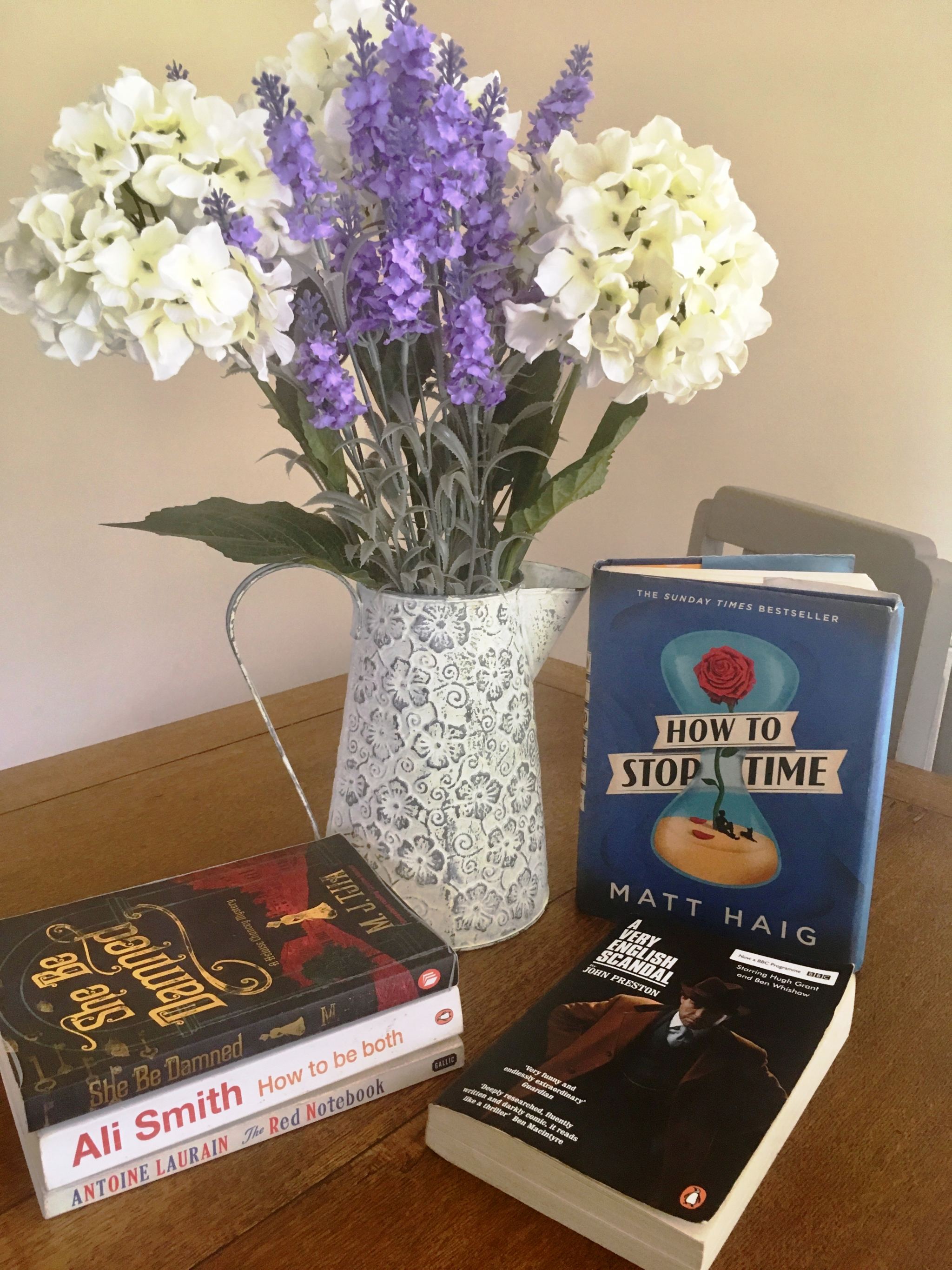 So in no particular order, this is what we’ve generally thought of our reading choices over the past few months.

This is the most recent book we’ve reviewed with most of us reading it just before the broadcast of the recent BBC drama starring Hugh Grant and Ben Whishaw. When Claire picked it we were excited as we all love a good political drama, and crikey this definitely is dramatic. It appears to be so farcical, it is almost hard to believe that it is based on a true story. We were hooked. 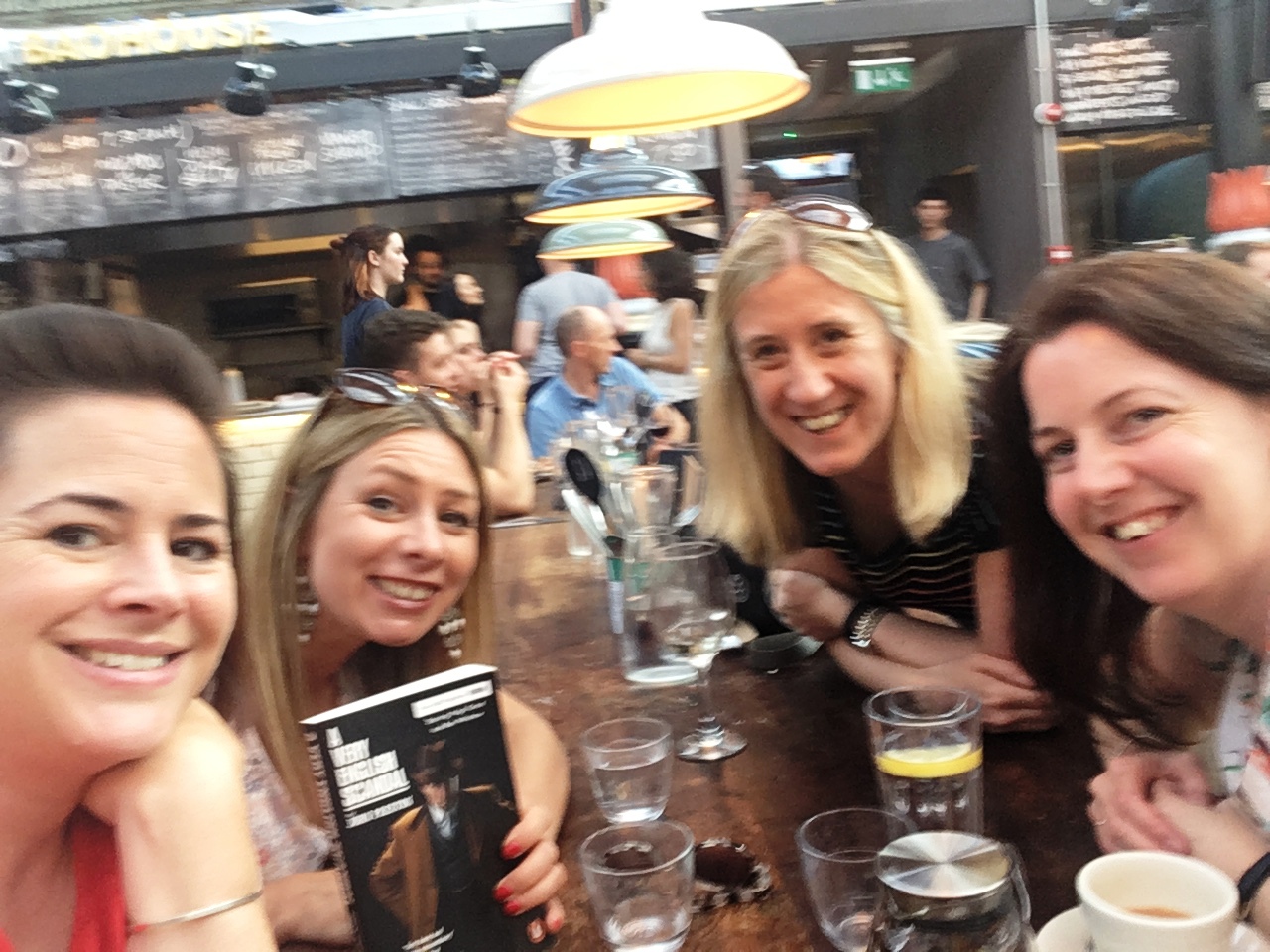 Watching the BBC drama, we all thought Hugh Grant and Ben Wishaw were brilliant – very close to how Jeremy Thorpe and Norman Scott are portrayed in the book. However we did all comment that the drama is definitely toned down compared to the book. To understand what I mean by that you’ll need to go and read A Very English Scandal for yourself.

Our rating of A Very English Scandal: 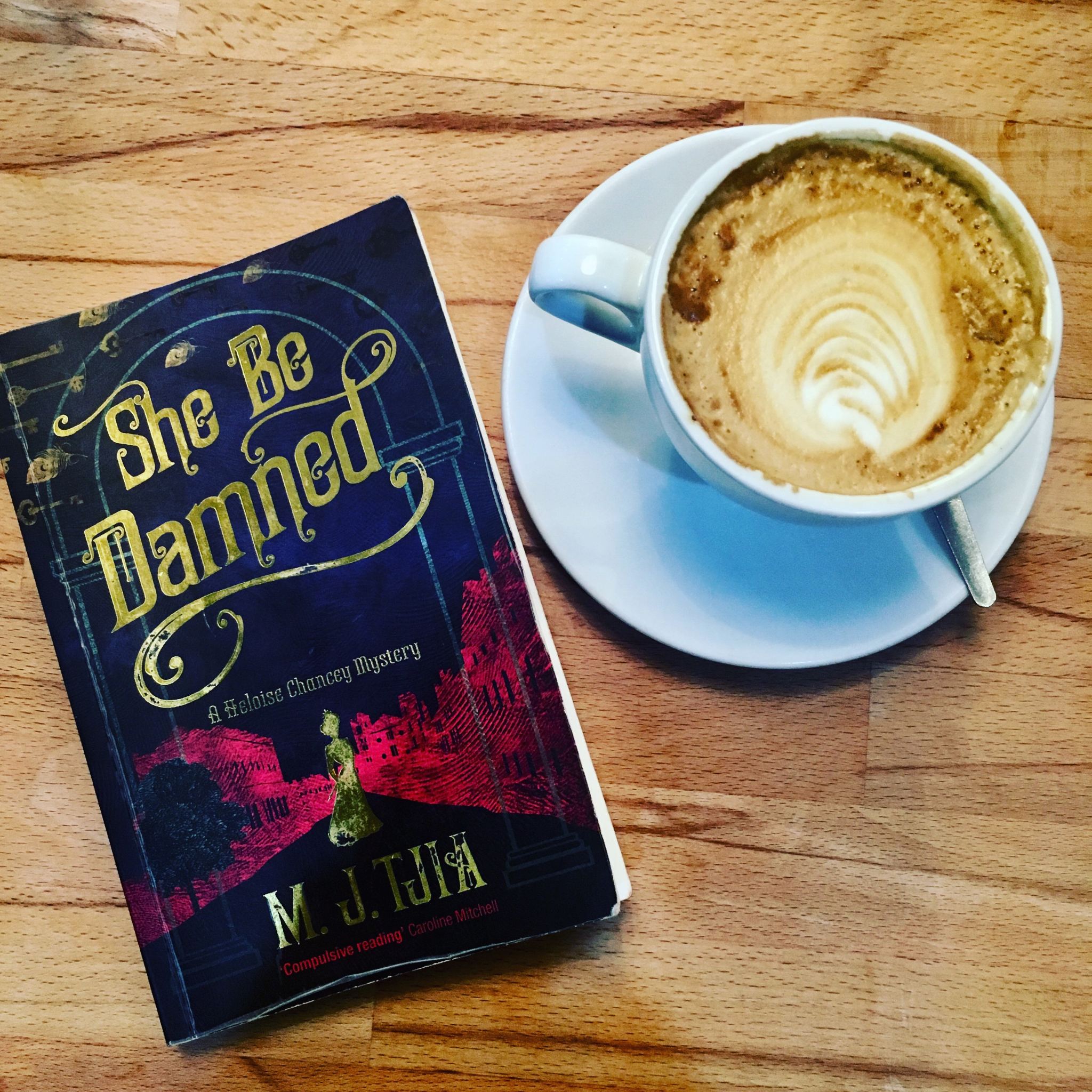 the blog tour of A Necessary Murder, the sequel to She Be Damned. Living in Victorian times, Heloise Chancey is a courtesan and professional detective. She is approached to investigate when prostitutes go missing and turn up dead with their sexual organs mutilated and removed.

Yes, this book does have the making of a good plot but it echoes Jack the Ripper and Sherlock Holmes. I don’t want to insult my own sex (especially as I do consider myself a feminist) but for me, I just found it hard to believe that a respected female detective existed in the 19th century. I will love it if I’m wrong!

If you do like a good mystery with a plot that is not too complex, then this is book you should try. For us at book group, it was an okay read; it’s easy and the story does move along but it’s not quite a page turner.

Hmmm, I wonder what I’ll think about its sequel…

Our rating of She Be Damned:

This really is a wonder! This is the story of 10 year-old Auggie who has a severe 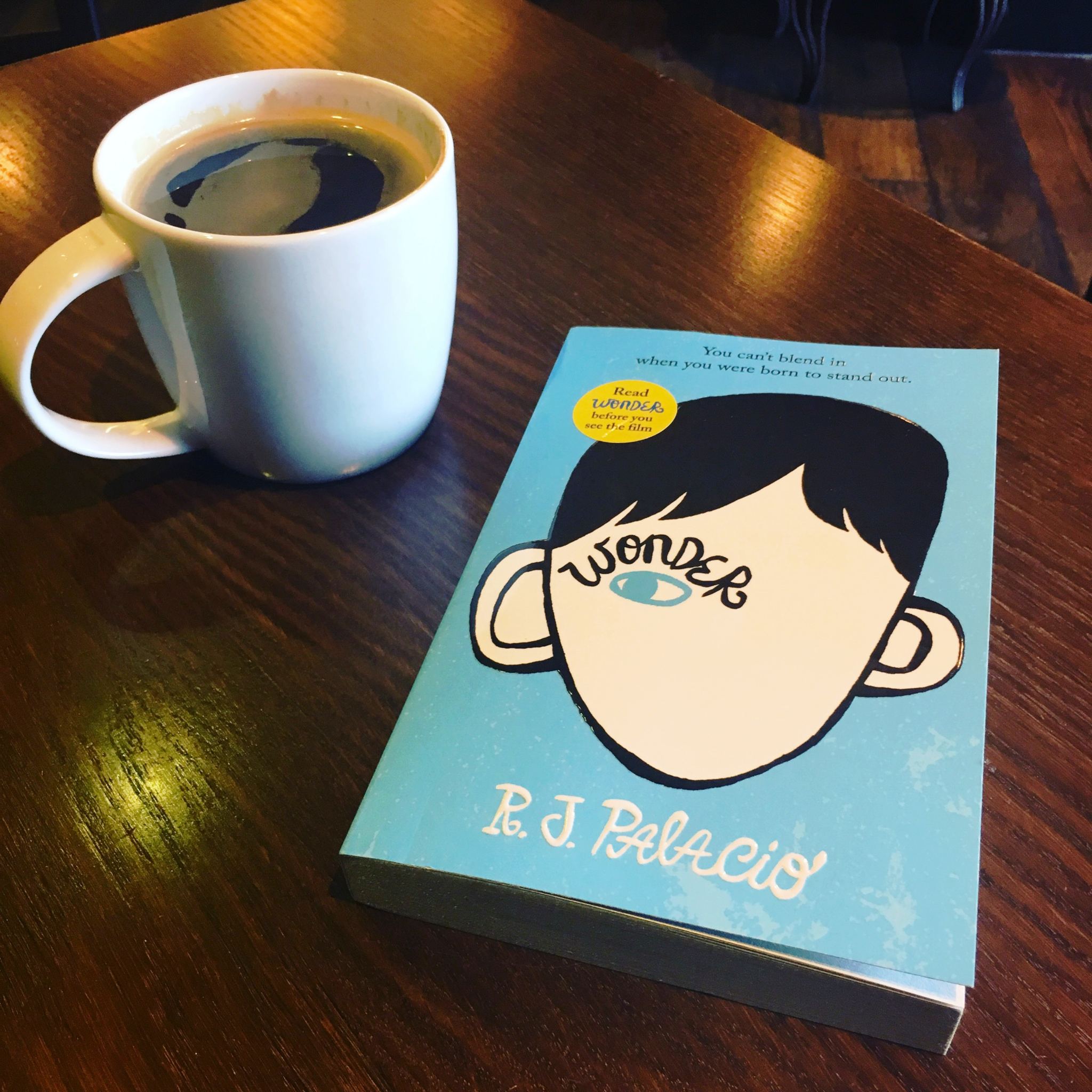 facial deformity. Due to his ‘disability’ he has been taught at home until now. As he starts mainstream school, the book brilliantly exposes that it is not the physical limitations that cause problems, but rather people’s attitudes.

The book starts from the perspective of Auggie but soon moves to the point of view of other characters. Normally I would find all the different voices confusing but in Wonder it works. The structure portrays the diverse and conflicting emotions that can arise when dealing with disability; feelings of love, empathy, resentment and guilt.

Wonder is classed as a children’s book, but it is a book for people of all ages, especially as it explores the ignorance and prejudices of adults as well as children.

This book left a big impression on us all – we all loved it. It is a very meaningful and beautiful book.

Our rating of Wonder:

How to be both

Holly was recommended How to be both. It is award winning novel and was shortlisted for the Booker Prize; but for us it was a disappointment. Quite a few of us didn’t even finish it, including myself. 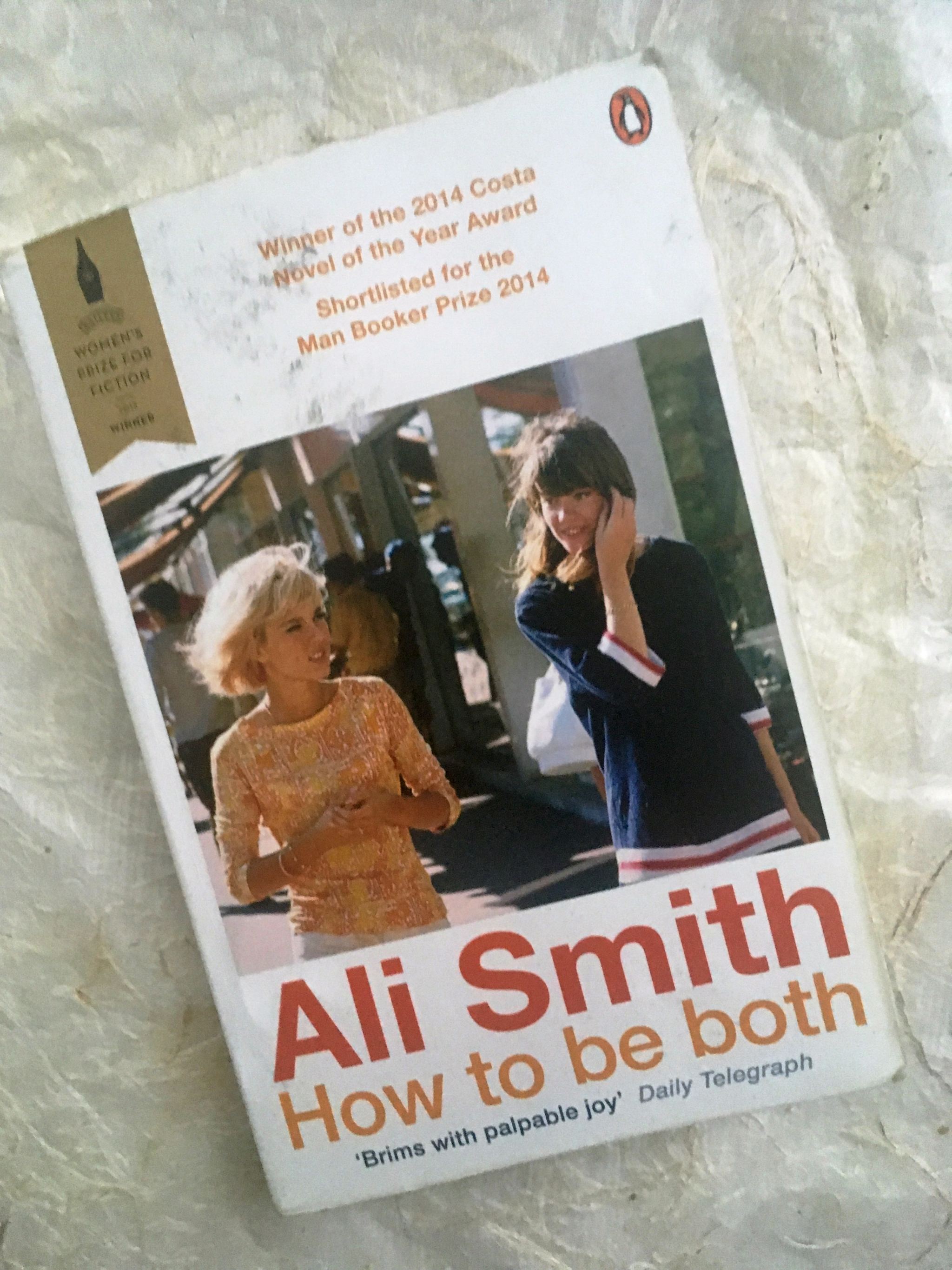 How to be both is two very separate stories with one taking up the first half of book, and the other story taking up the second part. Half of all printed editions of the novel begin with George’s story, a teenage girl trying to come to terms with the death of her mother. The other printed editions start with the story of Francesco del Cossa, a real-life 15th century painter. The book has been published this way so that the reader can apparently have different experiences reading the same story.

My copy started with George’s story. I did have empathy for George but if I’m honest I found the narrative confusing as it fleeted from her mother being alive to dead, to alive again. I found it quite hard to follow, and when I mentioned this, my book groupies agreed. I did finish George’s story and start on the second half but when Holly suggested not to bother with the second half, I took her advice as I just found it hard work.

I was told by my book groupies that I didn’t miss anything.

Our rating of How To Be Both:

Murder on the Orient Express

Hard to believe but I wasn’t actually that familiar with Murder on the Orient Express, never reading it before or watching an adaptation. Therefore I couldn’t work out if the ending was brilliant or a bit of a cop out. I still can’t if I’m honest. But my book groupies love this book. As Hazel said, it has stood the test of time. 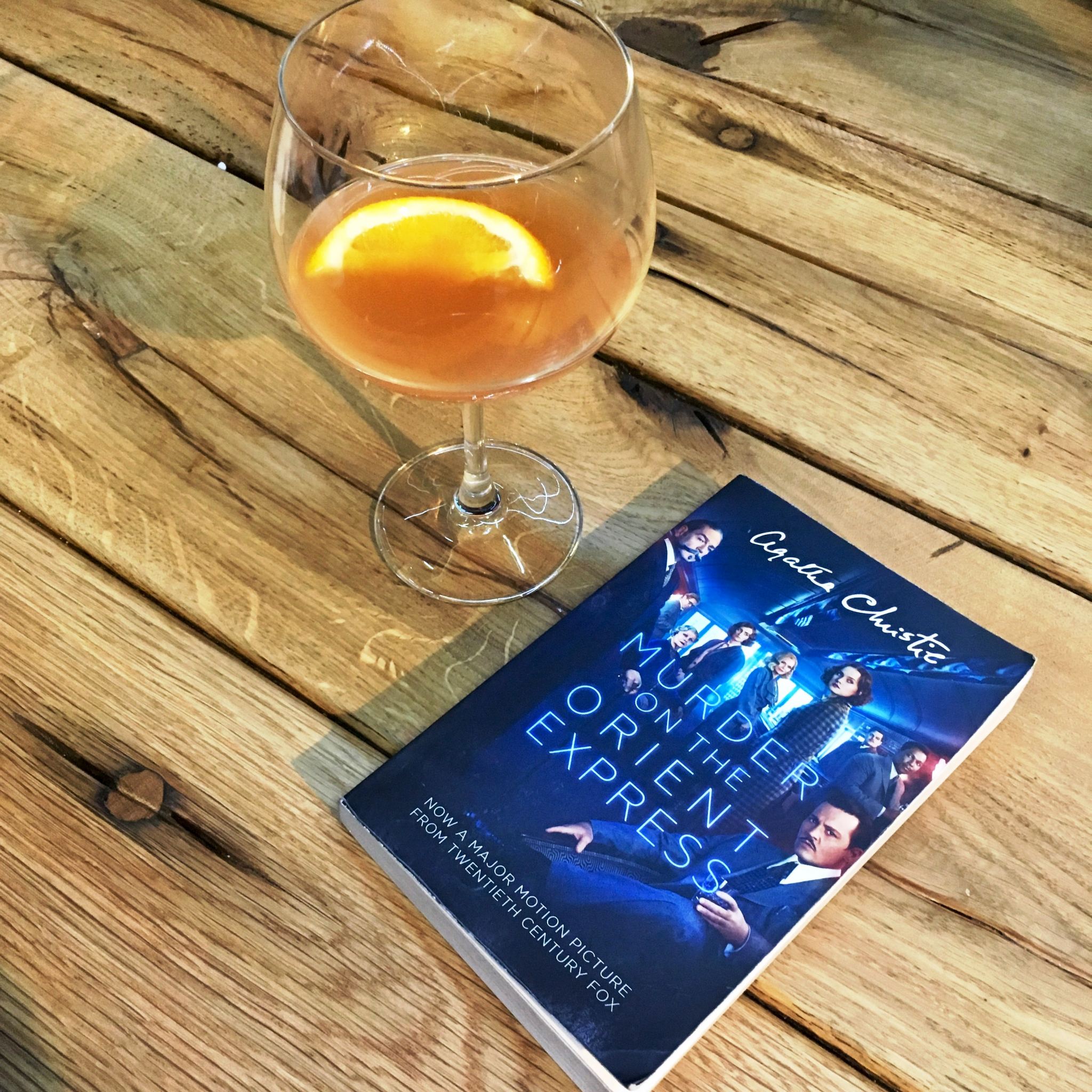 This is the classic murder mystery. The famous Belgian detective Hercule Poirot is travelling on the luxury train. When a murder is committed he finds himself investigating his fellow travellers that all seem to have a motive and alibi.

Christie’s characterisation is vivid. They are clearly characters of the time, with all their beliefs and prejudices on show to the reader. I have to admit I was uncomfortable with many of these beliefs, but Christie’s writing is so superb, you do almost forgive her for this.

It is a very well thought out intricate plot that kept Kim up late into the night as she couldn’t put it down – for her it was a real page turner. There is no doubt about it, the story does keep moving and keeps you guessing. It not predictable, and for us the ending blew most of us away.

Our rating of Murder on the Orient Express:

We loved this book; it’s beautiful and charming.

It was Kim’s turn to pick a book and as she was busy she just wanted a quick read; she did a search and The Red Notebook came up. With only 159 pages you can literally read it in just one sitting; and it will warm your heart. 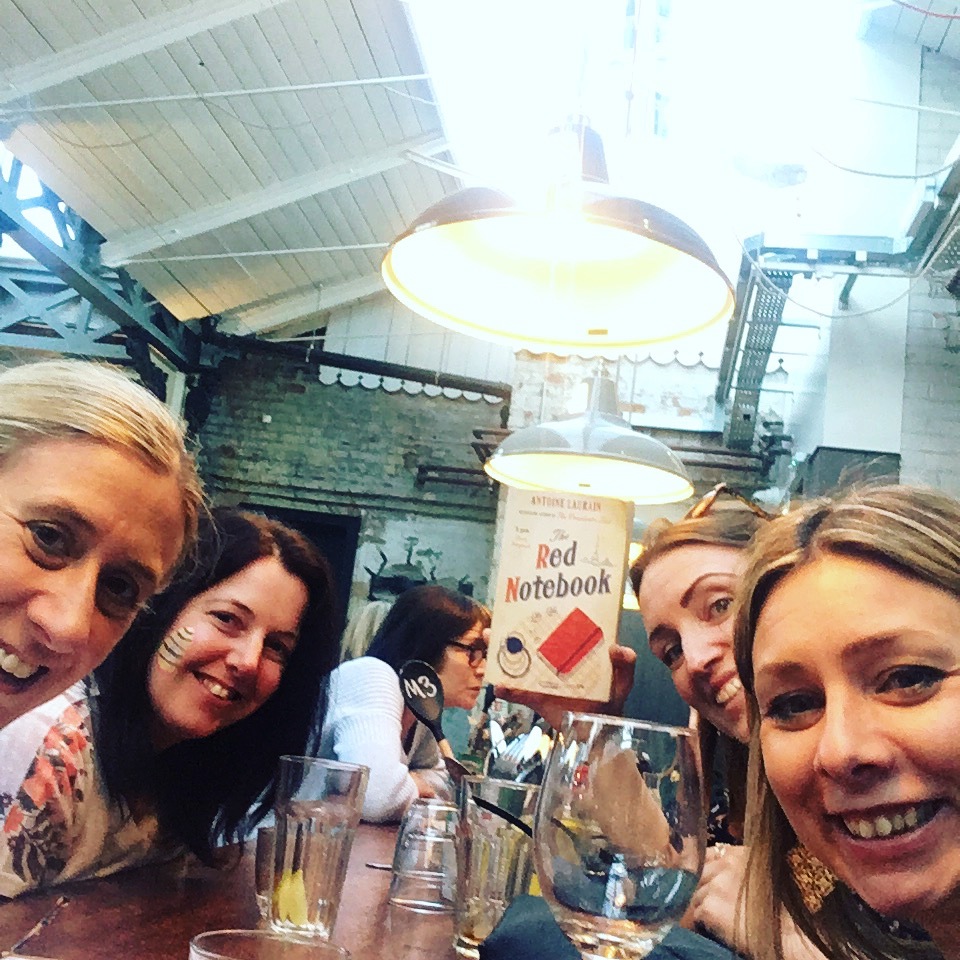 Laure is mugged and her handbag stolen. Literally her life is in her handbag, including a red notebook with all her thoughts, hopes and fears. Local bookseller Laurent comes across the abandoned handbag, and feeling a connection with its owner he tries to track her down to return it. Yet there is no name, address or even photograph to help him.

Set in Paris, The Red Notebook soaks up the Parisian atmosphere. The setting is so vivid and portrays beautifully in the narrative.

As a group, we all thought Laurent sometimes went about it the wrong way in his search for Laure but we forgave him for this as his heart is definitely in the right place. In fact we were all rooting for Laurent.

Our rating of The Red Notebook:

Small Great Things is a book everyone must read. As it makes us face our unconscious bias it is not a comfortable read, but it is astounding. It has been pitched as the To Kill a Mockingbird for the 21st century and after reading, us book groupies can see why.

As with all Jodi Picoult novels, the author does not shy away from difficult subjects. 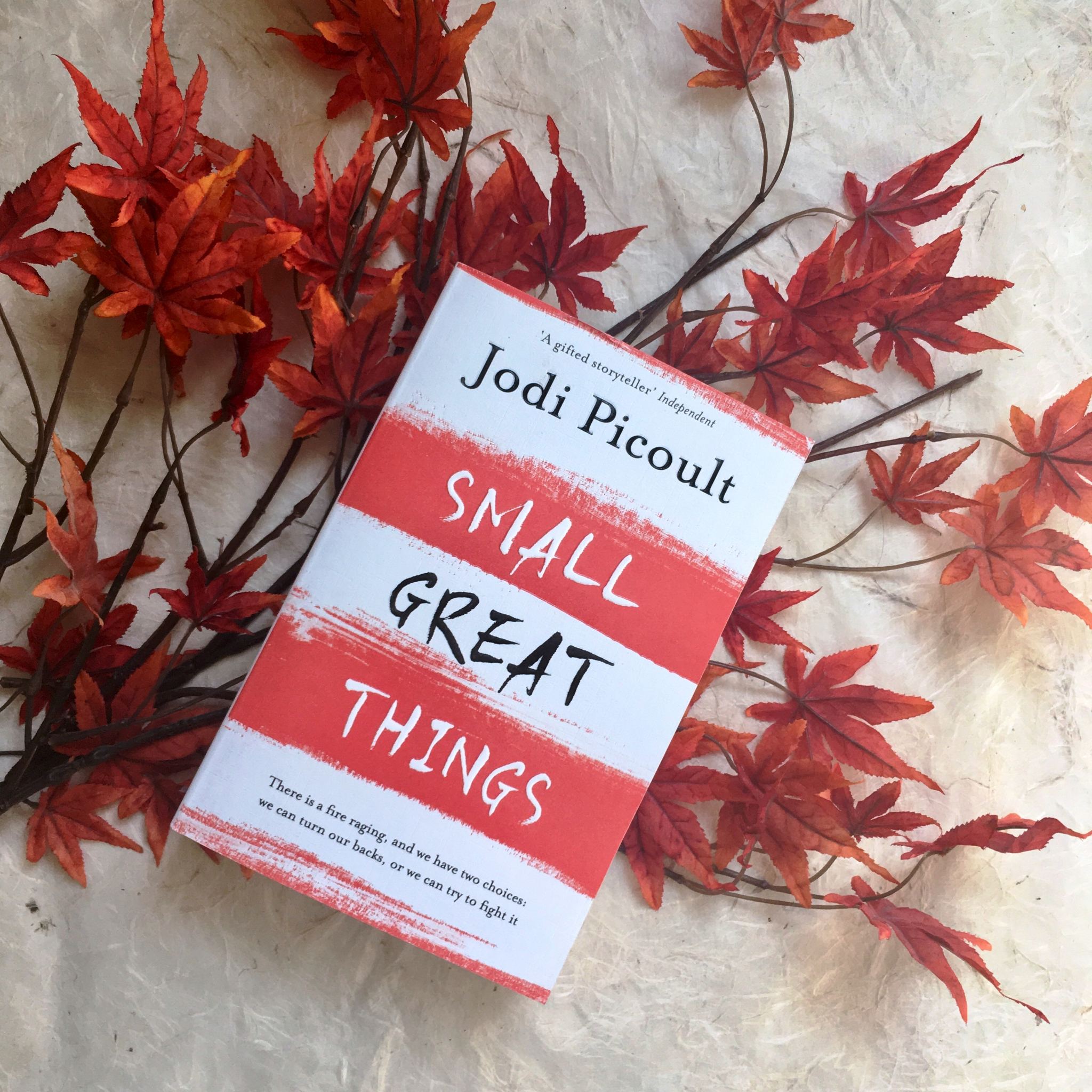 Ruth is a devoted and very experienced labour and delivery nurse. Ruth is also African-American. Following a routine check-up of a newborn, Ruth is told she cannot have anything to do with the baby. The parents are white supremacists and don’t want Ruth to touch their baby. Tragedy strikes when the baby dies after a routine procedure and the only person in the room with the baby is Ruth.

Charged with murder, Kennedy McQuarrie, a white public defender takes on Ruth’s case. However they clash when Kennedy advises that they cannot make the case about race.

We all thought this was an emotional and intelligent read that really opened up our eyes. Yes, it is a difficult read as it questions your own beliefs. But as I said earlier, Small Great Things is a book everyone must read.

Our rating of Small Great Things:

How To Stop Time

As everyone seemed to be raving about this book, I couldn’t wait to read it and thought it would be a brilliant choice for book group. After reading it I was disappointed; it’s depressing. I was relieved when I finally finished it. I genuinely thought I was the only person in the world not to be impressed with How To Stop Time – until I discussed it with my book groupies. They didn’t like it much either for exactly the same reasons. 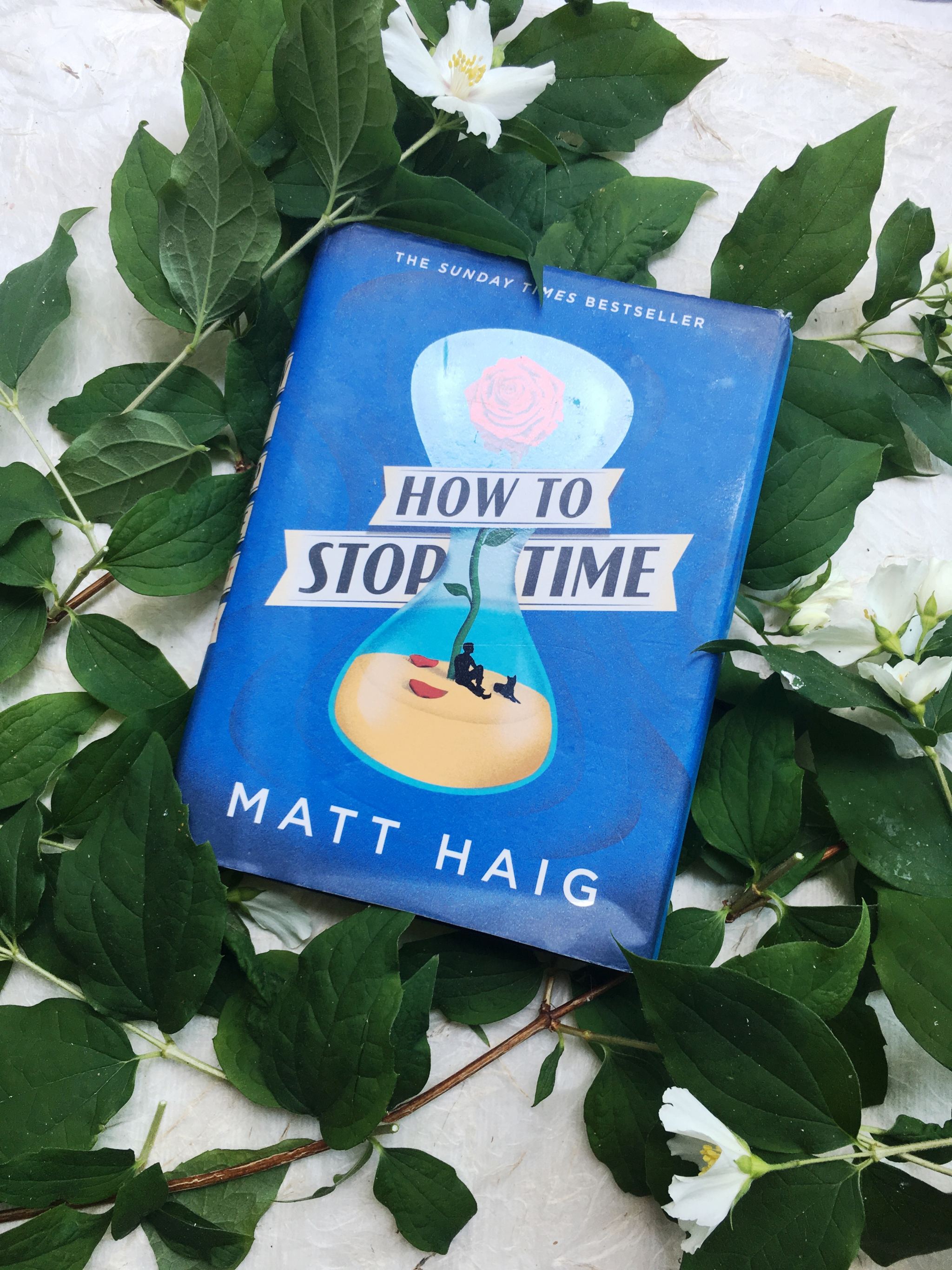 How To Stop Time is the story of Tom who appears to be in his early 40s and living a quiet life. However Tom has a rare condition which means he is actually well over 400 years old. A member of The Albatross Society, an organisation for people just like him, Tom has to continually change his identity to survive. He also must never fall in love.

Loads of people have loved this book, with it getting rave review after rave review. But for us we found the plot slow, Tom to be so full of anger and self pity and the ending disappointing. We were bored.

Our rating of How To Stop Time:

Thank you everyone for reading our book group reviews. If you’re in a book group, please let us know what you’re reading. We’d love to hear from you.