Never before have I thrust a book so much into people’s hands and insisted they must read it. To say I loved This Is Going To Hurt is an understatement; it frequently had me howling with laughter – and I really mean howling. It also broke my heart and it even had me nearly fainting (but then I am a tad squeamish and have been known to faint reading before). Most importantly it made me feel so grateful to all the frontline staff working in the NHS that dedicate their lives to their jobs.

This Is Going To Hurt is a collection of diary extracts from former doctor Adam Kay. Kay was a junior doctor from 2004 to 2010. After a tragic incident Kay decided to leave the profession; ‘sorry for the spoiler – but you watched the Titanic knowing how that was going to play out’ Kay writes in the first few pages. However he still has a ‘strong affinity with the profession‘, so when junior doctors were being branded as lazy and greedy by the government in the 2016 pay dispute, Kay was livid. He decided to go public with his personal diary to show us all what it is truly like to be a junior doctor. The result is outstanding, hilarious and heartbreaking. It is essential reading, vividly exposing the emotional, personal sacrifices junior doctors make every day. It is also a call to arms to help save the NHS.

As the bulk of the book is short diary extracts (which expose Kay’s unique and brilliant sardonic wit), this is a book that you can quickly race through, great for those of you that are short of time. Yes, Kay uses medical terminology, but also provides brilliant and hilarious end notes to explain the medical terminology. I don’t think I’ll ever forget his infamous description of his first ever ‘degloving injury’ involving a penis and a lamppost! Nor will I ever understand the amount of people who choose to stick objects up certain orifices!

I usually drive into work but chose to get the bus just so I could read and read this book. This meant that I ended up getting lots of strange looks on the bus as I was frequently crying with laughter. But believe me, the strange looks were definitely worth it.

Since I have read This Is Going To Hurt, the BBC have announced it is going to adapt it into a comedy drama (I will definitely be watching that). We also now have a new Secretary of State for Health. Like I’m sure a lot of people, I was shocked and pleasantly suprised when I saw the new Health Secretary reveal his bedside reading days after getting his new job. 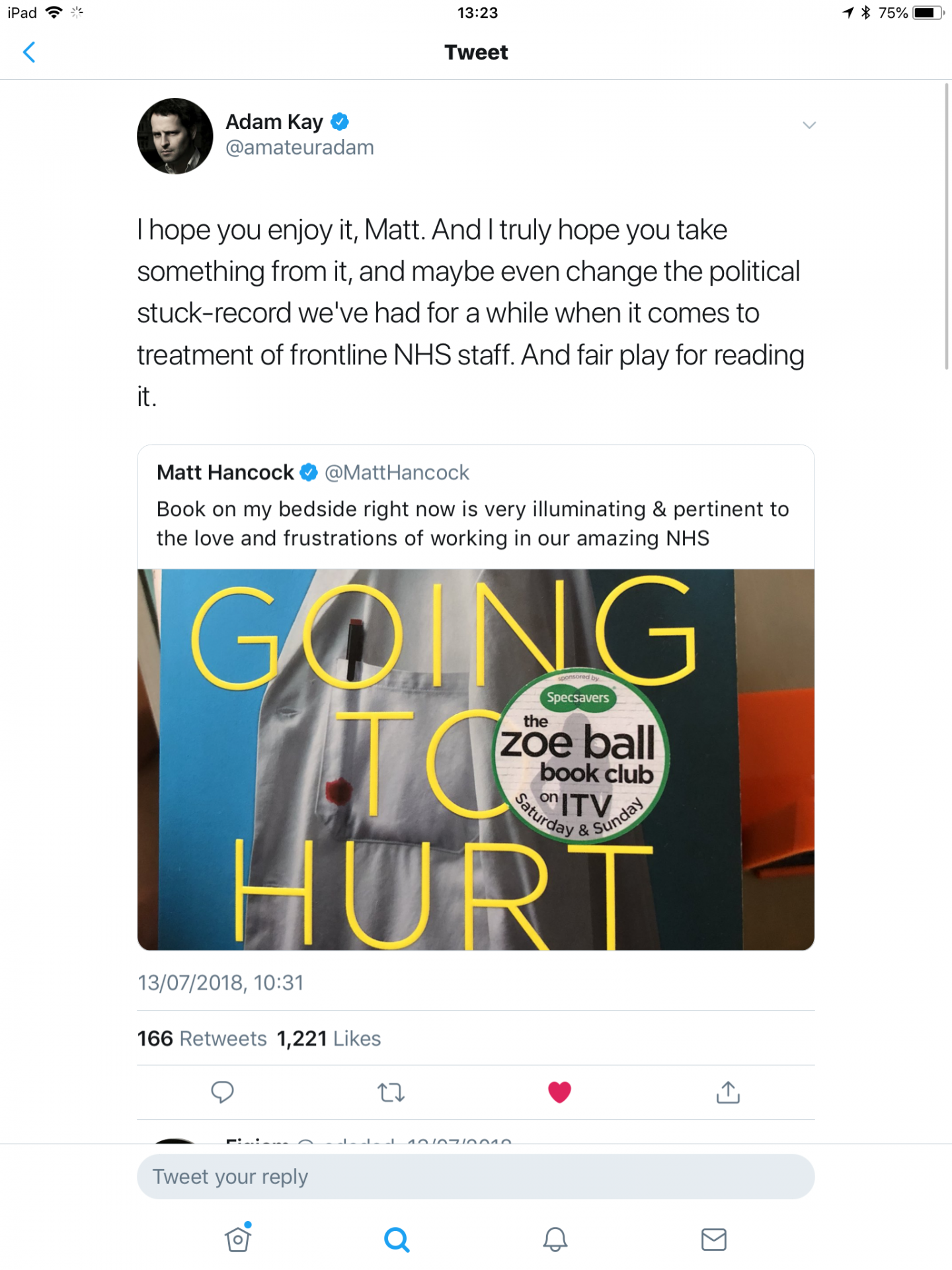 Okay, I know I’m a tad late to the party in reading This Is Going To Hurt as it’s been out a little while and many of you may have read it already. But crikey, if you haven’t yet, you need to. You really do!!!! It is so painfully funny but also heartbreaking as it gives us a real and very raw account of what many NHS staff have to face every day.

This Is Going To Hurt is simply brilliant. Thank you Adam Kay.

Thank you also to the Zoe Ball Book Club. After seeing This is Going To Hurt reviewed on the show, I was desperate to read it. I wasn’t disappointed.